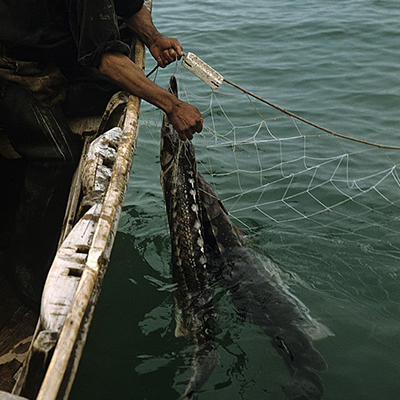 Passion and Patience, such is Persia

We will be talking about origins, about the violet sea, about eggs, about gold.

Le Khävhiär is so ancient. Its history goes back so far that it reminds all of us who love the taste that we were all born from foam.

That we share its candor and fragility, that we are the precious good of the movement, and the ephemeral absolute. The ancient Persians called caviar the “strong biscuit”, a promise of unequaled vitality, endurance, and power. As were all outbreaks, as are all seas, as shall be Aurea Ova.

Originating from the Caspian, and the Azov, Aral, and Black seas – which once formed, long ago, a single large sea called the Paratethys, and from lake Baïkal or rivers such as the Volga, the Danube, and the Po, and also the Amur, the sturgeon is one of the most ancient species of fish.

Nevertheless, it had taken only the last ten years of the 20th century, and the first few years of this century, for the most prestigious populations of the species in Persian : Tas-Mahi, Ozun-Burun and Fil-Mahi – in english : Oscietra, Sevruga, Beluga — to come close to disappearing: not because of a geological catastrophe — how many of these have they survived in their 140 million years of anadromous behavior? — not because of pollution, but because of the rampant deregulatation and greed of Humans.

Thus, in 2008, the nations bordering the Caspian sea adopted a courageous moratorium, outlawing the fishing of sturgeon, and so forbidding all legal exploitation of so-called “wild” caviar, the grey gold.

Iran, for its part, and from its own shores, set up a remarkable policy of restoration, releasing each year millions of fry from three Acipenser varieties, the pride of the sea. The aim, and investment, go far beyond marketing motivations.

When a fishing tradition is so ancient that it has disappeared from food-producing memory, the fact that the sea is brutally losing its populations, and getting dirtier and dirtier, is unbearable to fishermen: going out at the end of every night, inspecting dawn after dawn the empty nets, sometimes going a whole month without seeing a single sturgeon, and returning to shore each evening with a light boat and a heavy heart, helps you to understand that the sea also has a heart, that “the sea cannot do without fish, that it needs them”.

Just as we humans, in priority to needing fish, or gold, need the sea. The innovative Iranian policy needs a little more time. And from all this time needed, the gold will be the result of the breeding.

Today, the golden eggs legally distributed are eggs of sturgeons raised patiently, intelligently, and sometimes with love. These are the only caviars that interest Aurea Ova.

And even though, in absolute quantity, after a few decades of effort, the world-wide breeding industry has had to work very hard to get up to even a tenth of what nature could furnish when it was intact, with all truly conscientious producers, those skilled in the reproduction of natural conditions, the care methods are being refined, and the quality is getting better and better, so that it now rivals what was once only created by water, the sky, and the unspeakable.

In fact, even some extraordinary innovations have taken place. Aurea Ova is discovering and following them up for you, wherever in the world they occur. And we make these high-caliber caviars available to your desires whenever it is worth it, and whenever the result is exceptional.