The history of sturgeon and Caviar is mysterious and fascinating.

6000 years ago, Caviar was known as fish eggs prepared with salt and left in clay or ceramic pots to marinate before eating.

In Germany, it was made with carp roe among other things, while in Mesopotamia, the monarchs loved sturgeon roe.

The ancient Persian writings prove the existence of the word khâvyâr for sturgeon before the Greeks.

Its etymology comes from the ancient Persian Mâhi-e khâya-dâr which means ‘fish carrying eggs’, and which undoubtedly, would have undergone variations over the millennia, and to which it has be given different interpretations according to the languages such as Khayak, Havyar, Caviaro, Ikra ...

With the fall of the Roman Empire, Caviar was no longer courted in Europe, only fishermen and the common people consumed it in porridge, reselling the fish to aristocrats and kings.

From the tenth century, under German and Russian impetus, the trade in sturgeon and then in caviar experienced an unprecedented momentum.

In 988, the Grand Prince of Kiev, Vladimir I, imposed Orthodox Christianity as the state religion and the boom in sturgeon fishing intensified. It was not until 1199, when the Hanseatic League of merchants (Gotland) was created, for the countries of the North Seas to formalise their alliance and for the fish and Caviar trade to develop with the Slavs and the Mediterranean traders.

« You have to give them time, attention and patience, for the chemistry to happen »
Ahmad Shiroudian
Persian Master of Caviar

During the Renaissance, the Genoese and the Venetians traded throughout Europe and during their journeys they revelled in Caviars from different horizons. In 1475, Bartolomeo Sacchi known as Platina, published a gastronomic book in which he describes many gourmet recipes based on sturgeon and Caviar, while praising the supplies from Greece.

From the 17th century, the great Tsars of Russia appropriated this universe when they realised that the eggs were nobler than the flesh of the famous sturgeon.

From then on, Tsar Alexei Mikhailovich I declared in 1675 that Caviar was a state monopoly. A few months later, he signed a historic export contract with German merchants from Hamburg, Belkens and Ferpoten, with whom he traded more than 200 tonnes in 10 years. 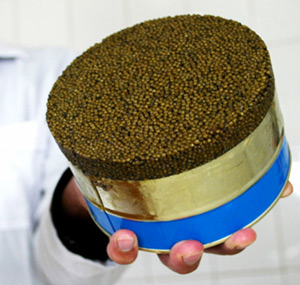 Caviar acquired a reputation as a rare and noble food with all the royal courts of Europe, and Peter the Great and Catherine the Great of Russia, actively participated in the economic development of Astrakhan as an essential fishing port for Russian Caviar.

In 1850, the United States of America became the number one world producer of Caviar thanks to the white sturgeon, but ultimately, they did not like the flesh of the fish or the eggs, and more than 80% of the production was exported to Europe.

In 1869, the German company Dieckman & Hansen was founded in Hamburg, then moved to the city of Khabarovsk to export Asian sturgeons and Caviar from the Amour River.
It remains to this day the oldest Caviar production company in the world.

In 1917, in the streets of Petrograd people chanted; “Down with war!", "Down with autocracy!", the Russian aristocrats left the country for Western Europe. Some settled in Paris, a city of love where the scent of Russian nostalgia embraces Caviar from the Caspian Sea with gulps of vodka, allowing it to democratise. 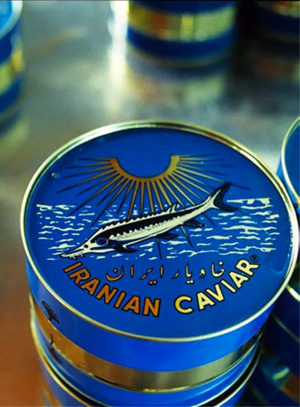 The demand was growing, the Iranians and the Russians decided in 1927 to create a joint Irano-Soviet fishing company to organise the exploitation and distribution of the Caspian Sea products.

It was a real revolution in the world of Caviar. Caviar known as Malossol became the pinnacle of refinement, great Champagne lovers prefer Iranian Caviar to Russian, as it was too salty for their taste. The Shah of Iran, as a fine Ambassador, encouraged the appearance of the beautiful blue Iranian Caviar boxes on all the prestigous tables of the world.

Iranian Caviar therefore experienced unprecedented success, until the end of the 1990s, when the annual stocks of the Caspian Sea fell dramatically.

The sturgeon was on the verge of extinction, overfishing and overproduction ...

It was a thunderclap! In 2006, CITES (a UN body) banned the export of sturgeon products from mixed origins, especially those from the Caspian Sea.

Wild Caviar was gradually being replaced by farmed Caviar. But farmed Caviar comes from several sources, with different exploiting qualities, and variations in intrinsic values and taste.

The breeding farms and the Caviar distribution companies, bloomed like buds in the spring, few of them were keen to take advantage of ancestral know-how and a production quality approaching wild Caviar.

This is why in 2016, Aurea Ova was founded, so that the treasures of the seas can be discovered by a clientele made up of connoisseurs, novices, and demanding professionals.