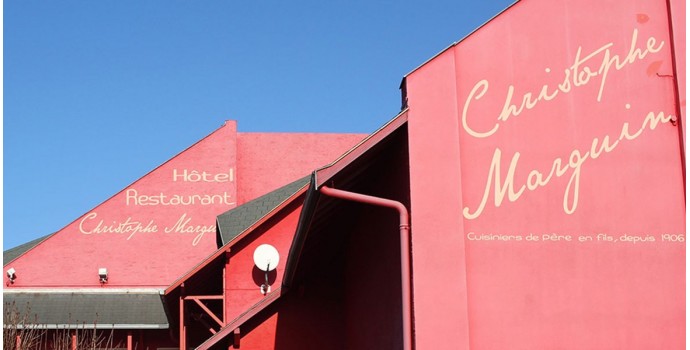 Good restaurants have four feet and a history

That of Les Échets*, Christophe and Nicole Marguin's restaurant, just outside Lyon, has kept its roots firmly planted on the threshold of the Dombes, between the running poultry of Bresse and the leaping frogs of the ponds, since 1906.

As for the history, it is that of the Marguin family, four generations of Chefs... and Cheffes to this day. "There are not many of us in the profession who can boast of being at the head of a family business that is over a hundred years old. It is a strength and a pride! Pierrette, my great-grandmother, cooked for the love of carriage travellers. As early as 1933, my grandmother Catherine was happily cooking for frog lovers.

In 1966, Jacques, my father, combined his tenor voice with the piano and turned his kitchen into a theatre. As for me, since 1992, I continue the love, happiness and theatre by perpetuating the authenticity of our cuisine." 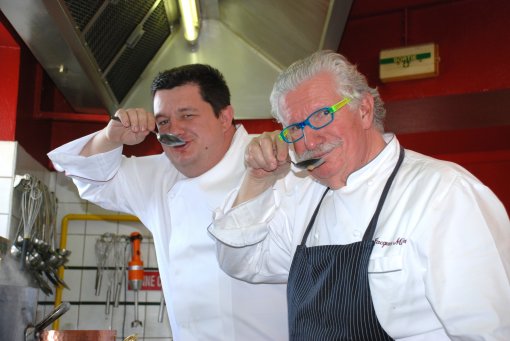 For the master's path is paved with tradition and terroir, with delicious revisitations and a desire for influence.

Passionate about his profession, a gourmet as much as a gastronome, several times crowned (first prize Prosper Montagné and International Pierre Taittinger as early as 1996), named Chef of the Year in 1997 by the unanimous vote of the Toques Blanches Lyonnaises, where Paul Bocuse, Pierre Orsi and Jean-Paul Lacombe, among others, were officiating.

On 5 March 2006, he was elected President of the same Toques Blanches Lyonnaises for three years... and he still is. Anxious to transmit the French culinary art beyond the borders, Christophe Marguin founded that year the Toques Blanches du Monde association, federating more than 6,000 chefs throughout the world. A judge in numerous culinary competitions, promoted to the title of Chevalier de La Légion d'Honneur in 2012, the chef from Les Échets has an impressive list of highly coveted awards and titles in the world of cooking.

In June 2016, bridging the gap between the land of a thousand and one nights and the land of a thousand ponds, our company Aurea Ova had the pleasure of sponsoring, and supplying with exceptional caviars - Imperial Kaluga Selection -, the gala dinner offered to 550 guests by the Toques Blanches for the 80th anniversary of this association, which has become essential for the international dissemination of French cuisine.

It was therefore only natural that Christophe Marguin should inaugurate this interview section on our site, which is destined to become a regular feature.