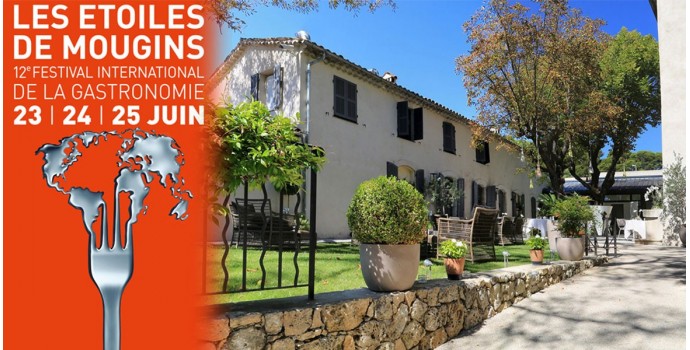 On Saturday 24 June 2017, on the occasion of the Étoiles de Mougins, a fabulous cocktail party orchestrated by Bruno Oger took place in his Bastide des Anges: 200 gourmets were able to taste a multitude of marvels served from the gardens to the pianos, making for an exceptional evening.

Mr Richard GALY, Mayor of Mougins, in the presence of Chefs Bruno Oger and Daniel Boulud, did not fail to publicly thank Maison Aurea Ova for its contribution as Official Sponsor of the Etoiles de Mougins 2017.

At this dinner, Aurea Ova's Golden Eggs were selected to be accompanied by the sparkling bubbles of Champagne from the Maison Philipponnat.

Under the swing of the orchestra present, the brigade of Chef Bruno Oger, gave us the pleasure of preparing an appetizer and speciality of the House, the Gillardeau N°2 Oysters, Cucumber Mint and Aurea Ova Caviar®, under the attentive and greedy eye of the guests.

A lifelong lover and enthusiast of cooking, Bruno Oger is one of the young guard of the most talented, creative and promising cooks in French cuisine.

At the helm of La Bastide since 2010, he offers a double starred cuisine in a magnificent setting at the Villa Archange table.

An evening of gourmet delights and unexpected encounters!